Smith, of Richton Park, Illinois, recently completed a six-week Basic Cadet Training program, a regimen of mental and physical challenges that introduced him to military life. More than 1,100 young adults participated in the program, the first step toward being commissioned a second lieutenant in the U.S. Air Force.

Calloway, who graduated from Southland College Prep in 2014, was selected by Smith to pin on the new cadet's shoulder boards at Acceptance Day Pinning On ceremonies marking entry into the Cadet Wing of the Academy.

"We're so very proud of these two fine young men who represent the high standards that Southland College Prep Charter High School sets for its graduates. We wish them all the best as they progress through a very rigorous world class program of academic, military, athletic and character building studies toward their goal of being commissioned officers in the United States Air Force," said Dr. Blondean Davis, CEO.

Smith, who ranked 14th in his Southland College Prep class where he played in the band, ran track and served as class Secretary, was offered full tuition scholarships at several colleges and universities.

"But all my life, two of my uncles, Vincent Hester and Willie Clifton, who both served in the U.S. Air Force, would tell me just how wonderful military life can be.

"Then, during the summer between sophomore and junior year at Southland, I had the great opportunity to be selected as one of 350 students out of 1,200 applicants to participate in the U.S. Air Force Academy's Summer Leadership Program.

"I was like a sponge in that first experience on the Academy's Colorado Springs campus. There was so much to absorb and learn, it was an awesome experience.

So, I was destined to join the U.S. military and this branch of the service," said Smith.

"I'm very grateful that my mother, Angela Clifton, and my father, Ronald Smith, played a very large role in encouraging me to adopt a military lifestyle," Smith said.

"I'm also very proud to have earned a Congressional appointment through U.S. Rep. Robin Kelly and to join the more than 4,000 other cadets who are enrolled in the Academy this year," said Smith.

Smith plans to participate on the boxing team and play flag football while at the Academy.

Calloway, of Matteson, Illinois, played in the Southland College Prep band and was a member of the school's National Honor Society chapter.

During his first year at the Air Force Academy, he was on the Dean's List with a GPA above 3.0 and on the Commandant's List whose members are graded on military proficiency.

Earlier this year during spring break, Calloway joined 15 Air Force Academy classmates and built houses from the foundation up in a Habitat for Humanity project in Oklahoma City.

This summer, he took a chemistry class and a survival training program at the Academy.

He says that he plans to major in geospatial science, a discipline that many U.S. Air Force officers rely on as it uses information technology to learn about diverse cultures and physical landscapes to understand the people, places and processes of the earth. 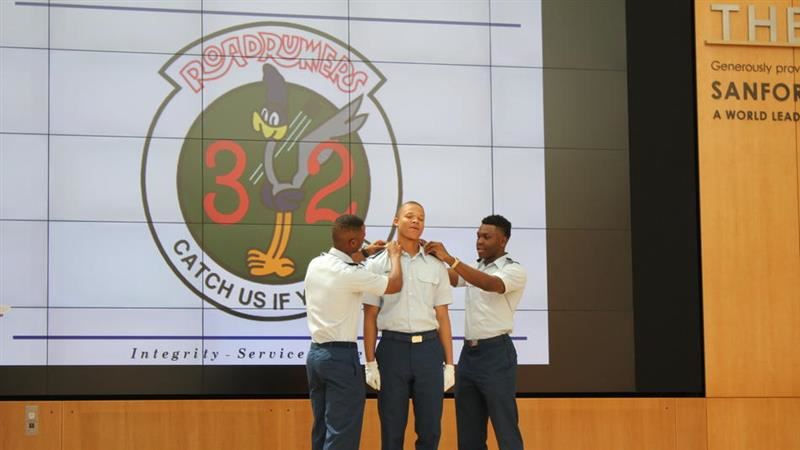